This year I’ve done inktober with coloured post-it notes, drawn with Bic biros, white ink gel pen and a coloured pencil or two. Constraints like that are a good aid for creativity. The Post-it notes are not very environmentally friendly but since I inherited them it’s better to use them than just bin them. 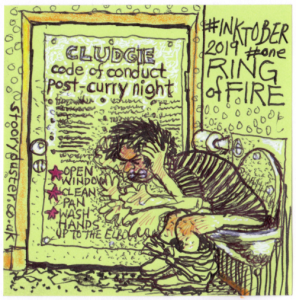 Ring on fire – colour version here for the illustrated Scottish word – rift. Curries this hot with this effect I can only remember from my students days. Might it be that I’ve built up a tolerance or is it that I just prefer better curries? How many students out there have a code of conduct pinned up in their cludgies for after a curry night? 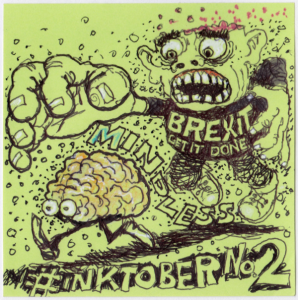 UK and Brexit. It seems we have been infected by the Trump madness where sections of the public seem to accept lies and half truths as statesmanship and have come to believe that what they wanted, which has moved from a bad thing to an even worse thing, is still the same original thing that they wanted originally. Experts ignored. I wish the no deal brexiter could capture his brain in critical thought, analysis or reflection. Sadly no. 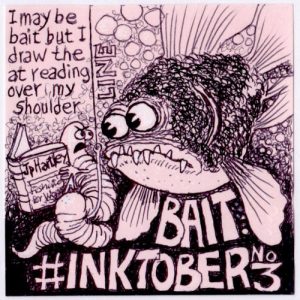 I cheated on this one. I reworked a drawing I did here for the illustrated Scottish word – Shouder of a worm on a hook underwater reading a book complaining to a fish that it draws the line at things reading over its shoulder. The book is J R Hartley’s; Fishing for Worms, memories of angling days. 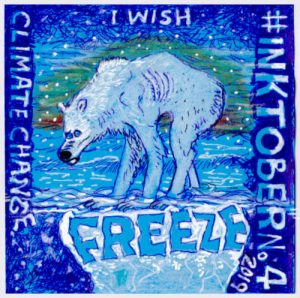 Well. The ice is melting. It’s a fact. Glaciers are shrinking year on year. The great North West passage was once a dream. To find a way through the pack ice. Now there is very little ice and no pack and consequently no easy way for Polar Bears to feed themselves. We know warm water expands and so coastal cities will go under. The first impacts of this is flooding caused by storm surges. A skinny Polar Bear and the use of blue Bic biro pen on a blue post-it. 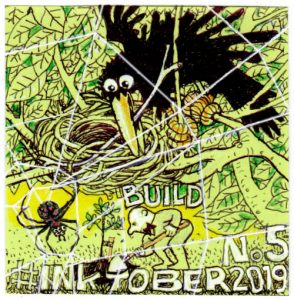 Let us try not to demolish the future and build instead.

We should abandon the “haughty dogma that we alone are in possession of minds, while other animals are mere automata — moving machines, governed by instinct alone”

“We need another and a wiser and perhaps a more mystical concept of animals… In a world older and more complete than ours they move finished and complete, gifted with extensions of the senses we have lost or never attained, living by voices we shall never hear.

They are not brethren, they are not underlings; they are other nations, caught with ourselves in the net of life and time, fellow prisoners of the splendour and travail of the earth.”

Quotes from Brainpickings’ post on the thoughts of the great nature writer Henry Beston. 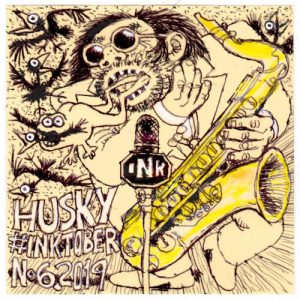 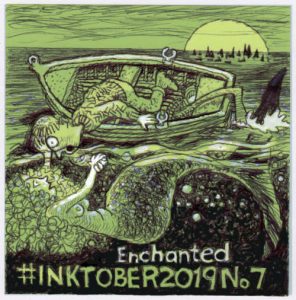 I made a colour version of this first for the illustrated Scottish word – Selkie-wife – here before I made the Inktober one. The Inktober one shown above is done with Bic biro, white ink gel pen on a yellowish green post-it note. After scanning I digitally made it a little bit greener but apart from that – all hand done on wee 75cm squares of paper. Very satisfying.