Woohoo, final week completed. Still drawing using ink scientifically designed to flow through a metal tube measured in microns around a tungsten carbide ball almost as hard as diamond onto the Post-it note without leaking or clogging.

This scientific marvel is known as the Bic ballpoint pen.

Société Bic in France developed the ink and the ballpoint pen patent was licensed from László Bíró a Hungarian-Belgium inventor in Argentina and Bic began manufacture in the 1950s. My favourite pen for sketching since the 70s. 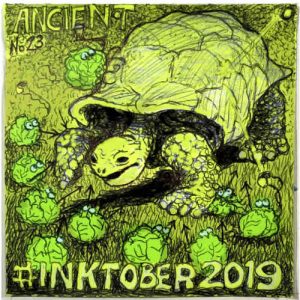 Over the centuries ancient George never ceased to be mystified as to why the local ambulant lettuces hated vegetarians so much. Bic biro on green post-it note and tiny bit digital colour. Just to give the armed lettuce that fresher look.

I never could come up with a real solid reason to convince my students who wanted a free reign to choose anything rather than stick to the project topic as assigned – “because the topic is boring”. I tried to tell them that the tighter the constraints the more opportunity there is for creativity to arise whereas they believed that you could only be truly creative if you were ‘Free’.

I now have the analogy of jumping in a flying time machine and saying ‘let’s fly anywhere’ rather than ‘let’s fly somewhere’. Except I don’t lecture anymore.

I couldn’t manage a month of Inktober if I didn’t give myself the constraints of using a Post-it note and ball point pens and the instruction to be quick and non judgemental no matter what.

And a little Who side note: I’ve watched Dr Who since the beginning and It gave me the opinion that the Tardis is a conscious thing in and of itself and it decides where Doctor ends up. I was beginning to think that the Tardis as an entity had been forgotten until Neil Gaiman’s episode turned up ‘The Doctor’s Wife’. A must watch. 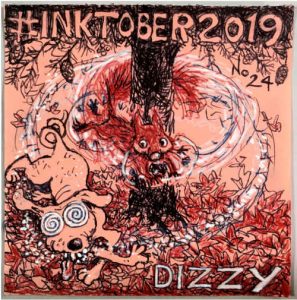 Dizzy dog – it’s what my terrier does in the woods on the dog walk while the red squirrels snigger at him in the tree tops. He races around, excited by their scent, looking in the leaves. But I do him an injustice, he knows they go into the trees and often stares up trying to spot them. Red and black Biro on pink Post-it note and white ink gel. 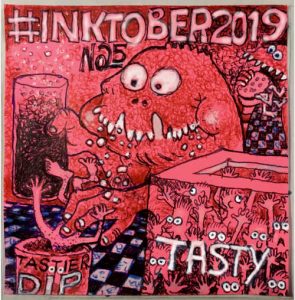 A tasty dip being used to add piquancy to the human appetisers. It’s an idea I used before for the Scottish Word ‘Mak-oot’ but the humans in that case were packed in disposable juicers to be liquidised. Red mainly plus blue & black Bic biro ink ballpoints with white ink gel on a pink Post-it note. 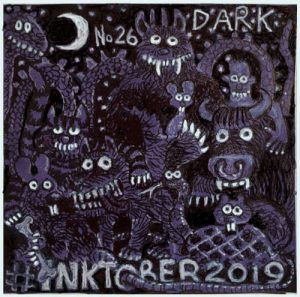 A dark night in the Highlands and a reminder that we in Scotland as well as having Nessie (the Loch Ness Monster) we also have wild beavers. For several decades. Black Bic ballpoint and white ink gel pen on purple Post-it note. 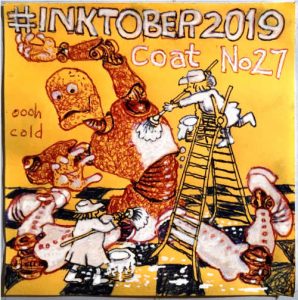 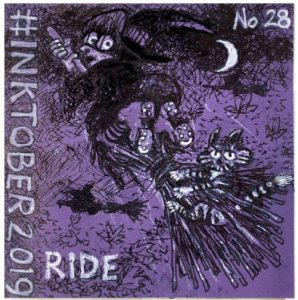 A ramstougerous Scottish moggie unwillingly hitching a ride on a broomstick on a cauld dreich night. All mostly Bic black biro, with a touch of white pencil and highlights in white ink gel on purple Post-it note. The post-it note was so dark I had to use white pencil to sketch the composition. 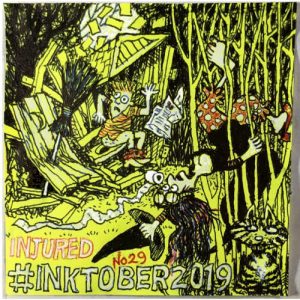 Injured pride as one’s hubby is revealed in the exploding privy reading a muggle newspaper – all because one lost control of one’s ride home from a lively night out with the girls. Black and red ball point Bic biro on a yellow Post-it note with white ink gel for the highlights. 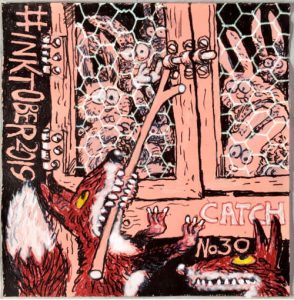 “Never fear Mopsies we bring Freedom – but there’s a wee catch attached.” Said the fox. Made with black and red Bic biro and a white ink gel pen plus touch of white and yellow pencils on a 75mm pink Post-it note. 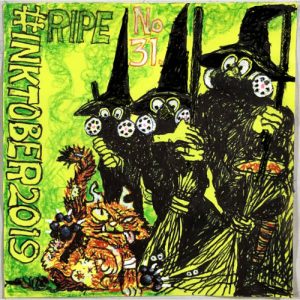 “Where shall we three meet again so as to avoid your evil toxic old cat?” Black and red Biro pens, white ink gel pen and green pencil on a yellow post-it note. I have no doubt this cat is inspired by Greebo the cat belonging to Nanny Ogg from the Disk World books by Terry Pratchett (Greebo was less tatty). I too knew the sort of women Terry must have based the characters of his witches on, particularly Granny Weatherwax.

Two I knew as a child were working single parents in Scottish rural life in the 30s through to the 60s. One had two sons and the other had seven sons and two daughters. Both were fiercely independent (fierce is an understatement) and utterly respected in the community. Neither were witches as far as I knew.

Both wore tackety boots on a daily basis.