Week two of Inktober and my rules of engagement are to work with Bic ballpoint pens on small coloured post-it notes that are 75cm (3 inches) square. In addition I use a white ink gel pen and sometimes a touch of coloured pencils. 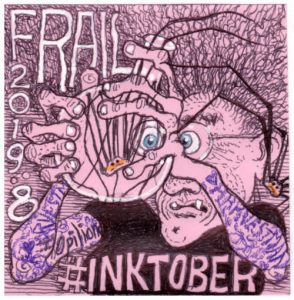 Dear Arachnophobia type people, be not afraid, these are Harvestmen not Spiders. This science woman loves them. She has tattoos saying I love Opilions. Done in Black and blue Bic biro, white ink gel pen and orange pencil on a pink post-it note. 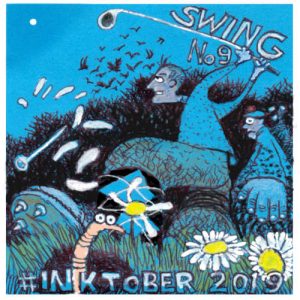 Dedicated swinger in the night. A Scotsman playing golf in the moonlight with his balls painted luminous. His trusted caddy in tow. His divot has flown in the other direction but resulted in a lucky escape for the worm. 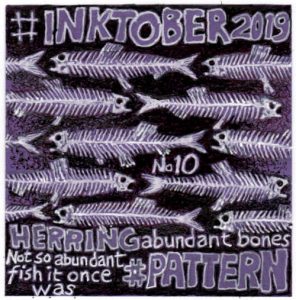 Herring. Or rather Herring bones. Once the plentiful silver darlings. This is no longer so. You cannot catch even one inshore with bait lines anymore. Times past, you could fill a rowing boat in a morning. We come too readily to accept as normal what we see around us. We should be outraged. In one lifetime I myself have witnessed these changes for the worse. Black Bic biro and ink gel pen on a purple post-it note. 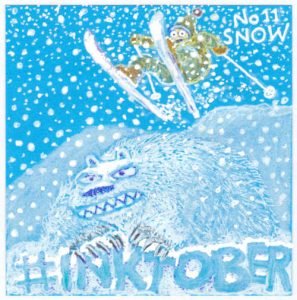 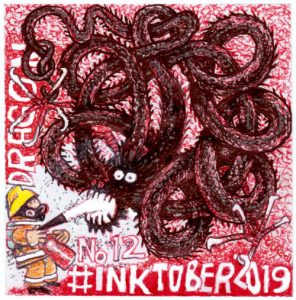 Can you follow the Celtic knot from the tail to the head? Red and black Bic biros + white ink gel pen on post-it note with orange & yellow pencils. I spent a long time developing the dragon and consequently used it three times. Once here, then second again for ‘ash’ with only a small alteration and then a third version, redrawn, much improved, coloured and reworked for the Scottish word Contermacious here. 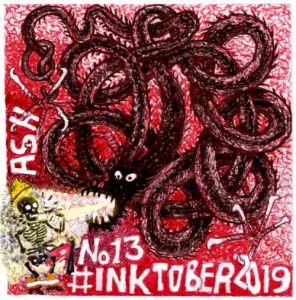 The dragon replies. I spent so much time on the previous prompt dragon I decided to repurposed it so that the fireman failed with his feeble extinguisher and it fitted the next prompt ‘ash’. Flesh vaporised and bones crumble to ash – Unlucky 13. I redrew the left side and corner section and digitally pasted it into the previous image. 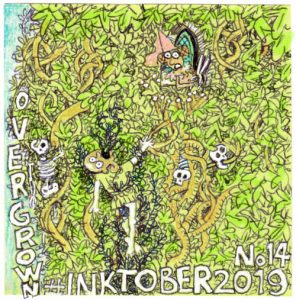 An overgrown spire with a Damsel in distress – hands blistered from wielding garden shears day and night.  Up clamber the Prince Charmings. But if they don’t climb quickly enough – the overgrowth grows right through their middle as well as through the brickwork. Black Bic biro, white ink gel pen, green post-it note and colour pencils.