The common Bic Biro, next to the pencil, is one of my favourite drawing tools but if you leave your Bic drawing exposed to the daylight it’ll go brown and eventually fade entirely.

This would have been horrific to many of my students who used to treat all their makings as potential museum quality art. Every piece that flowed from their hand was precious.

I had to work hard to get them to accept such a thing as development. Telling them they should worry their art like a dog worries a bone to find the good bits and even bin it and start again.

Back when I started illustrating one Scottish word a week I allowed myself about an hour to do an illustration. Very little ‘bone worrying’. No time. I had a 9-5 job, some semi regular freelance work, and two young kids to entertain. Development was minimal and quick.

Nowadays with time on my hands I often end up taking much longer (than I intend) and now try to follow my own advice.

Get the ideas out. Doodle, scribble, sketch, all without censorship or criticism or quality control in the least. Any self regard at this stage stiffles the flow.

I scribbled out the illegal Highland still with the distiller, his shelter, the cow eating the draff, the stream, barrels, and the sheep looking on. Then I redrew it with more consideration in green and begun to redo over it in HB pencil and stopped. The roof and still interior wasn’t right – it was annoying me.

I started afresh – again with green (see next stage further down). But none of the above was wasted, the learning one gathers sticks and it goes on and into the next iteration. Nobody learns from a perfect workflow.

Once I start developing I want to reduce repetition of effort as much as possible. Re-drawing dark over light is one way. In this case dark pencil over pale green. Sometimes I’ve used green, then brown, then red and then HB pencil and even gone over that with black ink.

The light table is a good addition too because with the light shining up through the pages the marks from the colour pencils diminish, since they’re semi transparent, and the dark more opaque graphite from the HB pencil stand out, in comparison, through the working top page.

On a light table you can also copy parts of your drawing onto separate bits and shift them about to vary the positioning and composition. Then when satisfied in your experimenting combine them into one single drawing again. The light table lets you see quite a bit through several sheets of paper.

I did that with the reclining man, the distiller, and the shelter. I redid the shelter as a cruck frame rather than rafters and split it into two halves, slid them about on the light table and experimented with the width and what went in the middle. The second drawing down in the composite below is one version of several goes at it.

The second drawing down from the top of the composite is actually later than the one immediately under it. You can tell because the reclining man is about to get his tackety bits and his head angled just as I want it – as shown in the one at the bottom of the composite.

I had in mind the bewitched groom by Hans Baldung. His woodcut made a big impression on me as a youngster and I wanted to follow his example in doing justice to a foreshortened reclining figure.

You are redrawing but without needing to find the energy and time to wring the form entirely anew out of a completely blank expanse. This is because the drawing underneath is supplying that energy and the time saving. You’re free to concentrate only on what you need to alter.

If you look over my versions the smudged and heavily worked areas are where the biggest struggles took place. The other parts were mostly re-positioning. Like the still, the mash tun, the roof beams, barrels, and the shepherd morphing from trousers and hat to deerstalker and kilt.

You remove, you add, you shift, you refine, you sharpen. And at every little change you’re asking the same question over and over. Is that better or worse?

Segue Back to Bic Biro.

After finishing and adding colour to the illustration I went and printed out a reduced size black and white line version and using the light table I redrew it entirely in black Bic Biro. Because I wanted a wide slim version.

I had to stick on an extra sheet of paper to widen it and added, one go freehand in Biro, the flock of miniature lively skierreburnersebuter sheep, boulders, and mountain side. I then added some grey tones digitally and used the image for my blog entry on how to make home made whisky which you can read here.

It was very satisfying drawing in Biro. Biro allows for a lot of going over which lets you build up really deep black as long as you avoid smudging the slow to dry ink.

I like the fluidity and detailed fine quality of line you can create but – examined under magnification – (twice life size if viewed at 100%) it’s not so neat. 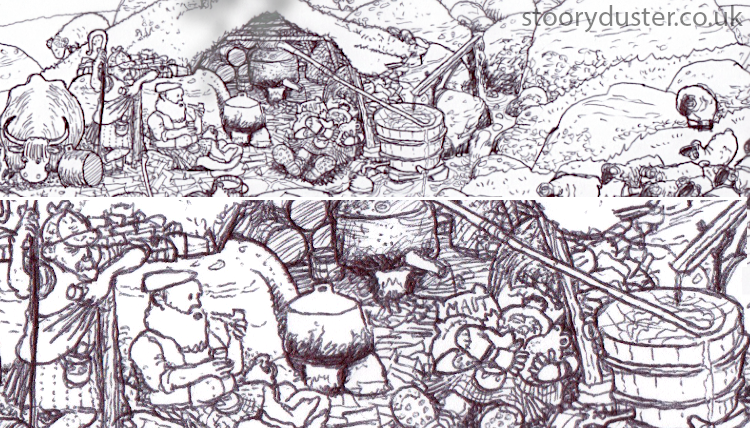 Nevertheless in the real world at the size that it is, it looks pleasing. Just that it’ll fade to nothing if under prolonged sunlight.

The final colour version I made was for the illustrated Scottish word Foreshot, a term involved in whisky production. Unsurpisingly.

The Owl and Pussycat meet the Submarine Pirates illustration development.

You can see the completed colour version of the Owl and the Pussycat meet the Submarine Pirates under the illustrated Scottish word: Rook – with its caption and translation here.