“Aye! Weel may ye sing o’ the maut, the meikle black deil, an th’ Exciseman, but…” You can read the rest on Maut/Malt and see the full illustration here: where the boatman speaks on to alert the happy singing smugglers that Exciseman Robert Burns and his dragoons are on their way and mad as hell because the schooner Rosamond fired grapeshot at them.

And he hopes their tide comes in in time.

Also included are the lyrics of Burns’s ballad The Diel’s awa wi the Exciseman.

While working out the caption and illustration for the word Maut I got carried away with researching how whisky was made and smuggling. I ended up adding unnecessary instructions on how to make home made whisky and It became too much for the pages of Scottish Words Illustrated. So I moved it here. See below.

How Home Made Whisky is Made.

Soak yer barley grain for a while and then spread it oot evenly on your warm malting floor where it will begin to germinate. You must turn over yer spread of damp grain by hand at carefully timed intervals to ensure even germination. When the germ has reached about twa thirds o the length o yer grain it’s ready.

You now spread yer malted grain in your drying kiln and halt the germination by drying it with hot air from below. You must turn it regularly to ensure even drying. Yer barley malt is noo ready.

Crush yer barley malt into a coarse-ground state, keeping the husk particles. The grains should end up in wee bitties – not too fine at all, nothing like flour.

Heat up yer mash tun, a large metal container with yer water, until it reaches 70°C and then slowly pour in your malted barley constantly stirring the mix until smooth. You now have a mash.

Bring yer mash to 65°C and put a lid on. Maintain it at that temperature for 90 minutes. Every 10-15 minutes lift the lid, check the temperature, and gie it a stir.

By the end o this process, the top part of the mash will become lighter and the grains will sink to the bottom. Magic is happening (Chemistry and Physics). Temperature is critical.

When yer time’s up cool the contents to 25°C as fast as however ye can. This prevents any sour fermentation happening (biology).

Pour yer mash oot through a colander separating the spent grain (draff) from the sweet sugary liquid (wort) which goes into your fermentation container.

You can feed your washed draff tae yer beasts. No too much at a time or they’ll get drunk.

From time to time open yer container and stir the fermenting wort with clean hauns or a spurtle.

When the airlock has stopped bubbling for twa days, open your container and pour what is now called the wash into yer distillation pot through a fine colander to remove any particles and bits. These particles and bits if left micht cause your whisky to become bitter.

Distill your wash through your still and collect the result. This is the first distillation and this first result is called low wine. At about 20-25% abv.

Stills work by heating what they contain until it’s hot enough for the most volatile stuff in it to evaporate out and pass up into a condenser which cools what evaporated back doon into liquid again trickling it doon into a separate container.

Mind that the shape o your still in some mysterious way affects the character o yer individual malt whisky and any distiller that’s proud o their whisky maks sure to replace their worn oot still pots with new ones o exactly the same shape.

The stuff you’re making eats yer still over the years and yer still will need replacing sooner rather than later.

You now put your low wine yiv collected from your first distillation through your still again. This is called the spirit run or second distillation which will get you yer alcohol to make whisky and which you condense from the still into a closed container.

A closed container because the spirits you make in the spirit run evaporate like anything in the open and can also easily catch fire.

You do not use the first 12% of pure alcohol distilled from your low wine, called the foreshot or heads for your whisky because, importantly, it will spoil the taste.

But also, on top o spoiling the taste it’s the stuff that gies those ‘products’ from those other folk’s badly run stills the deserved reputation o sending people blind. Amongst ither harmful affects.

Nor dae ye want what begins to come off towards the end, called the feints or tails, appropriately smelling like wet dog. That doesn’t make guid whisky either.

In the middle between the foreshot and feints is where the guid stuff comes off. Which is called the hearts. You keep that.

If you are working in batches you add back your foreshot and feints to the next batch of low wine going into yer still. And so it goes until you’ve worked all your batches through your still.

Some people add a measure of water to the the foreshot and feints they keep after each distillation before adding them back in to the next spirit run. And some folk sometimes distill a third time. The final yield from 4Kg of malted barley should be around 5-6 liters at 40° proof.

The material left behind in the pot still is called pot beer and can be dried and then used for feeding yer beasts.

Store yer yield in 50 year old oak kegs for at least 6 months – at least. Or if ye lack kegs put some 50 year old oak chips or oak pegs into the yield and into whatever sort of container you know will not transmit it’s own taste or dissolve.

After ageing in yer kegs or container for a decent time (the longer the better) decant your spirit into bottles through several layers of fine cheesecloth. Drink later.

Whisky does not mature any further once it is bottled.

Of course this recipe is useless as a guide in making whisky. You either need an auld whisky maker endowed wi generations o experience at yer elbow or a recipe that has the exact step by step quantities, timings, temperatures, and alcohol by volume (abv) measures tae guide ye. And have the ability to use malt shovels, thermometers, alcohol hydrometers, and the appropriate containers and scales to control and calculate these values. And a pot still you can be certain not to explode.

Go here if you want to know in better and more accurate detail how single malt whisky is made in Scotland.

And for some archaeology on Whisky there’s an article here on DigIT about old farmhouse still houses, legal and illegal, in Scots and in English (mainly Aberdeenshire areas).

DigIT is the go-to place for ground-breaking Scottish archaeology news and stories to spark your imagination. Expect to uncover a new favourite site, artefact and anecdote each time you visit. 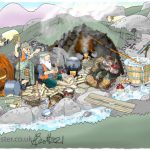