Ballpoint pen ink is not light fast. That means that if I leave these drawings in daylight they will fade faster than a water-colour painting in full sun. But as I used to say to my students. “All art eventually ends up as rolls of toilet paper. Don’t worry about it.” 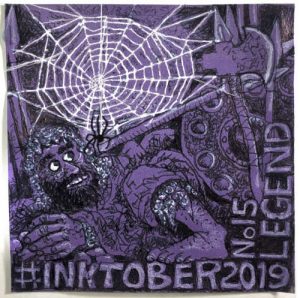 The Scottish legend that is Robert the Bruce and the thrawn spider wha widni gie in. White gel ink, black biro and white pencil on purple post-it note. I had to trim the spider’s web digitally a bit. The gel pen made it too thick. Spider legends are common to many cultures. Scottish word translations in the glossary at https://stooryduster.co.uk/scottish-words-glossary/index.htm 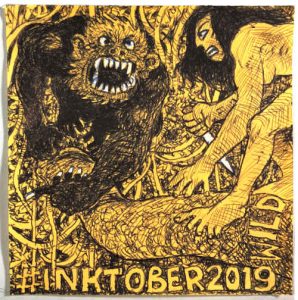 My drawing is not a patch on those of Burne Hogarth. I was wild about his art when I was a kid, one of the best Tarzan comic book artists ever and his drawings introduced me to how anatomy worked. Anatomy was taught at the college I went to, a long time ago now, and I wonder how many present day students would get to handle human bones that still had small flakes of flesh attached, with their bare hands.

The anatomist asked for volunteers to help him turn over the flayed corpse on the table and the whole room, in unison, took a step back – but I was sitting on a window ledge and will never know if I might have been that volunteer. The male nude model helped. He’d been a medical orderly in the war. Orange Post-it note, black bic biro and white ink gel pen. 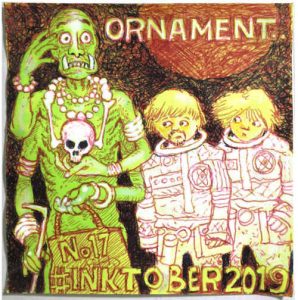 The forgetful head ornament incident on Mars caused by a wardrobe malfunction by the otherwise stylish Thark diplomat Pars Ptarkis while taking his guests shopping to boutique No. 17. As you might guess by now, I was a big Edgar Rice Burroughs fan. I’m pretty sure I read every single Tarzan and John Carter on Mars books in the 70s.   Red mainly and Black Bic biro plus white ink gel and some white pencil on a yellow-green Post-it note – some stronger green added digitally. 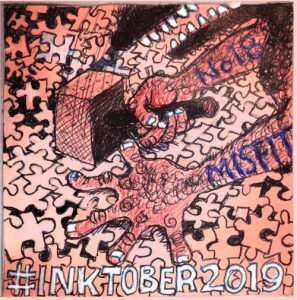 Misfit of a wolf-head using a maundae hammer to get its Jigsaw done no matter what. The Scottish word maundae means: the power/will to get the job done. Thor powered. Red, blue and black Bic ballpoint pen on a red Post-it note and white ink gel pen. 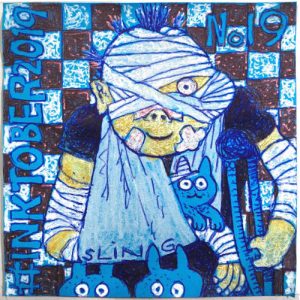 Young bandaged ‘failed tree monkey’ in a sling with the rescued cat from the tree it didn’t need rescued from. The full story and an enlarged and reworked version of this in full colour for the Scottish word Scart is here. Blue and red biro on blue post-it, white ink gel pen and orange & white pencil. The gel pen dissolves the pencil which creates some nice painterly effect. Unfortunately it also dissolves biro ink too which can neutralise the white but then again other times adds a nice tint. 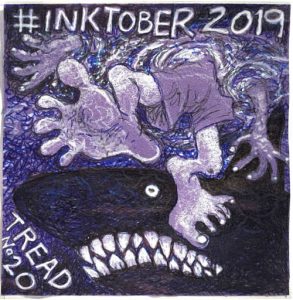 The Scottish shark named Tread wha taks louns treadin watter wi thir dookers anaw, iviry bit. The pair chiels are posted drooned an a shark hunt disni e’en get sterted. Translated as: The Scottish shark named Tread who takes boys treading water, swimming trunks and all, every bit. The poor guys are posted as drowned and a shark hunt does not even get started. Black and blue Bic biro on purple Post-it note with white ink gel pen and white colour pencil. 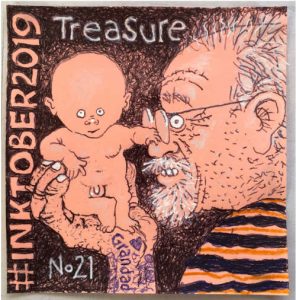 Too sentimental. But I reach that life milestone any-day now…  our eldest son and partner are on the way to become parents.  And it will be a boy so all things well I can start digging out the Lego in a year or three. Bic biro, orange pencil & white ink gel pen on pink post-it note. 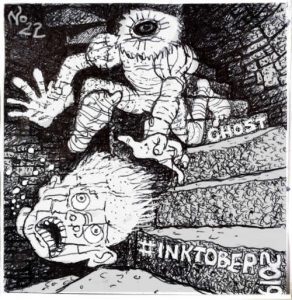 If being headless is one thing, losing it down the castle stairs is another. But I’ve got the stairs the wrong way round for a castle. Usually the curve gives right handed defenders the advantage while disadvantaging right handed sword wielding attackers coming upwards.  Ink black Bic biro scribbled on white Post-it note, slight bit of grey tint added digitally.